MoNiKa power plant technology center: Researchers and industry work on technologies for the energy-efficient conversion of low-temperature heat into electricity. 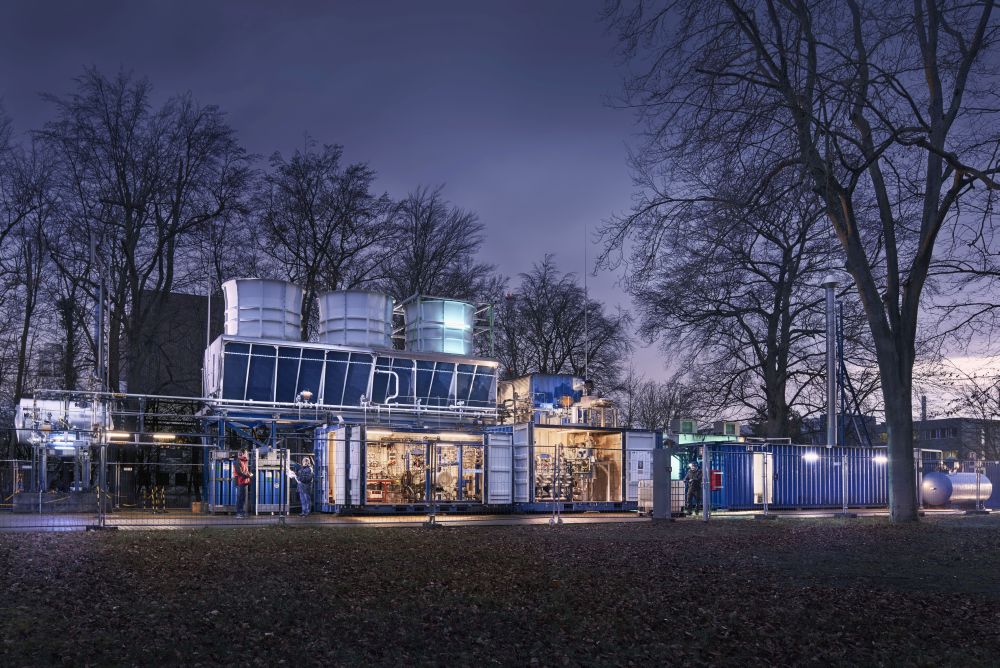 Low-temperature heat, such as that generated as waste heat in industry or in binary geothermal power plants, offers great potential for a sustainable and demand-oriented power supply. With the power plant pilot plant MoNiKa (stands for: Modular Low Temperature Cycle Karlsruhe), a research infrastructure unique in Europe has gone into operation at the Karlsruhe Institute of Technology (KIT). The aim is to make the conversion of surplus heat into electricity in the organic Rankine cycle (ORC) more efficient and environmentally friendly.

With focus on generating electricity with as low-CO2 and energy-efficient as possible, low-temperature heat has become increasingly important in recent years. "Instead of discharging heat, which is available as surplus anyway, into the environment, it makes more sense to use it further and produce electricity with it", explains Dr. Dietmar Kuhn, head of the Energy and Process Engineering working group at the KIT Institute for Thermal Energy Technology and Safety (ITES). So-called ORC plants are used to convert heat below 200 degrees Celsius to electricity for private households. They are based on the organic Rankine cycle - a process named after the British founder of thermodynamics, William John Macquorn Rankine, and known mainly from geothermal power plants.

This is a liquid-steam-cycle in which a fluid is pumped in a circuit and heated by increasing the pressure until it evaporates. The hot steam is passed over a turbine, which reduce the pressure and temperature from it and converts it into kinetic energy and finally electricity. Since the boiling point of water under pressure is several hundred degrees, much higher than what a low-temperature source such as geothermal heat can provide, the ORC process uses other substances as working fluids, unlike a coal-fired power plant, for example. At the MoNiKa pilot plant, the experts work with propane, which has a very low GWP factor that indicates the global warming potential (GWP stands for Global Warming Potential).

Strategies for increasing the efficiency of ORC plants

To date, the efficiency of ORC plants, i.e. the electricity yield from surplus heat, is only 10 to 15 percent. The central goal of the Karlsruhe scientists is therefore to develop new strategies to increase the efficiency of ORC plants and thus reduce the carbon footprint of power generation. "MoNiKa offers a state-of-the-art research and development infrastructure that is unique in Europe," Kuhn emphasizes. For example, unlike in most ORC power plants, the steam cycle in the pilot plant is operated supercritical. This means that in terms of temperature, pressure and density, the so-called "critical point" at which a gas becomes liquid and vice versa is exceeded, and the phase transitions become smooth. "This allows us to increase the electricity yield by twenty to thirty percent," says Kuhn.

The modularly designed pilot plant has a heating system that simulates the low-temperature heat source. Extensive sensor technology for measuring temperatures, pressures and flow rates makes it possible to compare data from ongoing operation with model calculations and thus increase the forecast quality. On this basis, the researchers want to analyze central components such as the heat exchanger or the innovative hybrid condenser and optimize them so that they operate in a more energy-efficient and environmentally friendly way. Among other things, the aim is also to reduce or completely avoid leakages in the working circuit.

MoNiKa achieves a thermal output of one megawatt and is thus of a scale that allows the research results obtained to be readily transferred to practice and scaled up. The pilot plant, where initial experiments are already underway, is to be used primarily for application-oriented research projects and will be linked to KIT's Energy Lab 2.0 in the long term. Kuhn and his team are currently identifying research topics and needs together with interested industrial partners. The large-scale investment project, in the context of which the power plant pilot plant was built at ITES, ran from 2013 to 2021 and was funded by the German Federal Ministry of Education and Research with 4.4 million euros.

You can find pictures of the construction work at "Fotogalerie"